Review of the P1PAD Paddle by CW Touch Paddles by Gabor Szekeres, S57WJ 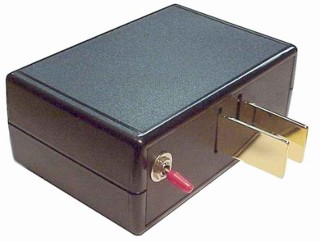 I decided to get a new paddle to replace my 20 year old home-made mechanical one that I had had since I started in amateur radio. I had a QSO with my old friend S51M a few months ago and he told me about the P1PAD touch paddle.

Bruno got me intrigued and I carried out some research on the Internet. I checked the CW Touch Paddles’ website at www.cwtouchkeyer.com and read most of the reviews on eHam, www.eham.net. Among the reviews, I found the one by F5VHC, who told me he had also described the CW Touch Paddle in FOCUS 83. This review compares my old mechanical paddle with the P1PAD touch paddle.

I was very surprised when I connected the P1APD to my ETM9COG keyer. I expected very sensitive paddles but instead, discovered the ‘touch’ feeling was the same as with my old home-made paddle, but with one exception – there were no moving parts. The sensitivity was just right and so my first impression of the P1PAD was good.

On the first day of using the P1PAD, I discovered during my first QSOs with the P1PAD that the box is weighted enough and doesn’t move more than my old mechanical paddle does. Of course, I was remembering that there is no need to ‘slam’ the P1PAD as I did with my old mechanical paddle. I made more mistakes with the P1PAD at speeds over 35 WPM, although I didn’t find it annoying. It is a new paddle and I have to get used to it first.

On the second day, I recalled that from time to time when using my old mechanical paddle, I accidentally touched the dot paddle with my thumb, but this didn’t cause a transmission of dots as I didn’t apply enough force on the paddle. Naturally, this is not the case with the P1PAD on which I have better control of my thumb. This is one more thing I have got to get used to.

Another thing I noticed was the position of my fingers on the P1PAD; they were positioned at the higher edge of the touch paddles instead of in the middle of them. I measured the height of the paddles on the P1PAD and those on the mechanical paddles, and found the difference to be just under half an inch. Basically, this doesn’t make any difference due to the sensitivity of the touch paddles from all possible surfaces, and just the ‘feeling’ is different. In a worst case, I will get a piece of stainless steel and put the P1PAD on it. I work in a steel factory and it is not hard to get a little piece, but on the third day, I found that if I positioned my fist differently with my fingers positioned on the middle to the paddles, then I might never need that steel plate!

On the fourth day of using the P1PAD, I noticed I was making fewer mistakes than I had been with the mechanical paddle. It was possible that the touch paddle was forcing me to concentrate more. I practiced off-air at 35-40 WPM and after a while I was able to transmit the word ‘Mississippi’. That didn’t happen at my first attempt, but to be sure of my capability, I recorded my sending into the memory of a ETM9COG keyer and listened to it at a slower speed, and there it was – flawless!

I had a QSO with S51M one week after I got my P1PAD paddle. We both used our touch paddles during the QSO. The speed on my ETM9COG was set to 35 WPM and Bruno was sending at 40 WPM.

I talked to HA5UY the following day and found he had been listening to our QSO. Gyuri said he was amazed with our keying – the rhythm and word spacing being just right. I am of the opinion that the P1PAD is a good product and I intend to continue using it. Comparing the price of the P1PAD with the mechanical paddle, it has a very good price/value ratio on the market, without any doubt.

Finally, I wish I could have had the P1PAD when I was learning to use the electric keyer. I believe that with this paddle I wouldn’t have made so many mistakes as I do/did with the mechanical paddle. If any of our children show any interest in learning the Morse code one day, then I will give them the P1PAD to learn their keying on an electric keyer.

Author: Gabor Szekeres, S57WJ Picture from www.cwtouchkeyer.com This article is republished from FOCUS 86.